How can I drill a big diesel tank without emptying it first?

Need to make a hole in a big steel diesel tank. I would say it has 5000 liters capacity, and it should have at least 2/3 filled or more.

Problem is if I go drilling, all the swarf can get into the diesel. Second problem is to avoid blowing myself up.

How would you do this?

This is a true case, not an academic question.

About diesel flammability, this is not the first time I hear something like: it's diesel, you can light a cigar with a propane torch while drilling it

These are similar installation, most of them had detachable parts or had a NPT thread built in already. 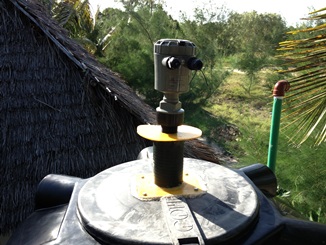 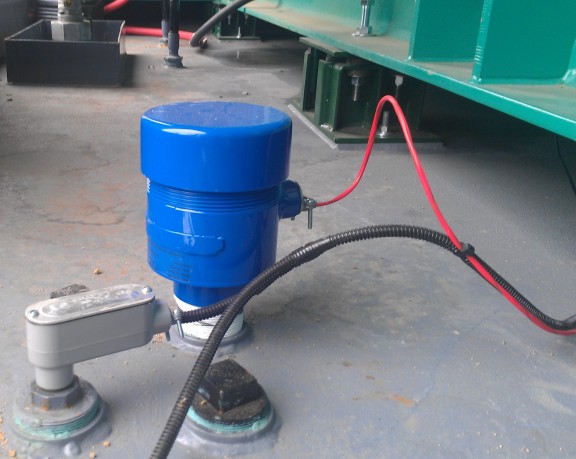 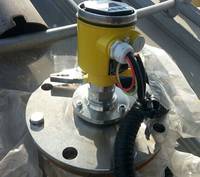 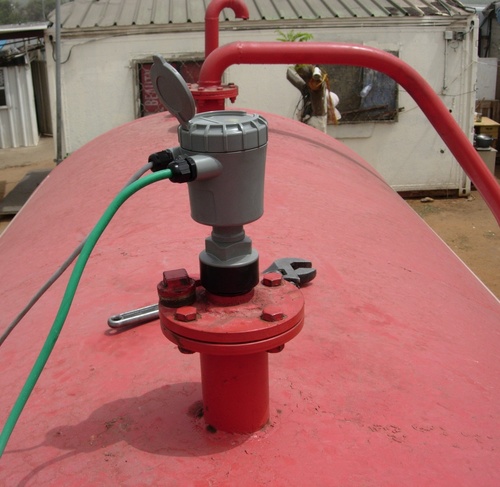 Okay I'm going to start this with a giant disclaimer in capital letters: DO NOT DRILL HOLES IN TANKS CONTAINING 3300 LITERS OF DIESEL FOR THE LOVE OF GOD.

Having said that (and hoping that your asking this question purely for academic reasons) i would say: start by filling the empty space above the fuel with argon, its the fumes that burn not the liquid, so if you drive out the oxygen and fumes with an inert gas it will mitigate the chances of an explosion. Then place large welders magnets all around the spot to be drilled to help catch the swarf, lastly use a fresh holesaw at slow speeds to help keep sparks to a minimum. You would want to test this method on a small scale model first. This MIGHT provide a safe way to cut that hole or it might result in a spectacular fire ball.

"Diesel fuel is commonly used in construction machinery, industrial machinery and generators. There are three primary concerns associated with diesel fuel:  Flammability: Diesel fuel is not nearly as flammable as gasoline or other common fuels (such as ethanol or propane) but it can catch fire and can be very difficult to extinguish. Do not smoke around diesel fuel. "

I wonder if it could help things to pour liquid nitrogen over the spot where you want the hole for a few hours before starting (and while you're making the hole) You'd be cutting into a slab of congealed diesel fuel that would hold back the diesel, and collect any shavings...

Of course, the low temp might change the steel strength and brittleness for the worse...

Are there water-jet cutters that can handle this thickness of steel?

Drilling down from the top is going to make it difficult to keep all of the tailings out. Having never done this myself (couldn't pay me enough), I can't speak to the safety of drilling into a partially filled diesel tank. What I can say is that I know others have done this and that diesel has a significantly higher ignition temperature than gasoline, and it doesn't vaporize as easily. That said, I'd try to keep the heat down to a minimum and avoid sparks.

The way I'd go about keeping metal from dropping in and temperatures low would be to use a hole saw with a fairly small pilot bit. Slather the drill bit in grease and then drill through another big blob of grease and keep the saw ring lubricated. Go slow and wipe off and replace the grease as needed. This should pick up the vast majority of the tailings from the pilot. Run the hole saw down until you are just about through (the thinner the better), stop. Finish up by tearing it out like you would a knock-out.

You don't want to "drill" a 1" hole in 3mm sheet. Without support the edge would be ragged and other problems would occur, such as fragments dropping into the tank.

The best approach is probably to use an annular grinder. They are used for putting holes in tile and glass. Search for "diamond hole saw" on Amazon. Use a lot of water to cool it and the slowest setting on the drill. Take a lot of breaks to avoid heat build up. As long as you are using a stream of water to flush the cutting area, no significant amount of metal dust will get into the tank.

The main problem is the chance that the slug could fall into the tank after you cut through. If the surface of the tank is curved, you will not break through all at once, so you just grind until there is only a little bit of connecting metal left, then grasp the cutout with a pliers and work it loose. File to smooth.

If the surface of the tank is flat, then avoid breaking through by cutting 90% of the way through, then bevel the saw (tilt it a little). This will cause it to go through one side first. So you just gradually adjust the tilt, cutting through more and more until you can work the cutout loose with pliers.

Don't worry about small amounts of metal filings in the tank, thats what fuel filters are for. If you attach a neodymium magnet to a cable or rod (STRONGLY) and drag it around the bottom of the tank you will find it picks up all kinds of metallic fragments and junk.

User assumes all responsibility! Adding CO2 to displace the O2 sounds like a reasonable precaution.

Use a knockout punch from Greenlee. Quite pricey though, do not buy a cheap one. Good up to 2.5 mm (10 gauge), meaning it's not going to like 3+mm but it will probably work once. Advantage is you only have to drill a 1/4" or 1/2" hole. This does require access to inside the tank to screw on the punch. 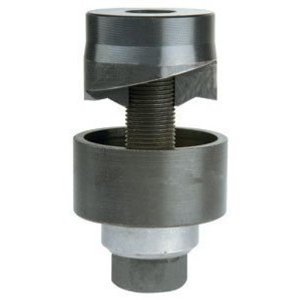 Depending on the curvature of the tank you may dimple it. This is not applicable in all situations.

Solution: Hire a professional to do the job.
They know what they're doing and they bear the risk and liability.
There's a reason they're called professionals.

P.S An (extreme) alternative way to drill the hole on a full tank without danger of explosion and without the iron parts getting into the tank, would be to do the drilling [1] totally inside petroleum environment -externally [2] while there will be high petroleum flow from the tank to another small container through that whole for the duration of the drilling process [3] with the hole at a low side point while the tank is full, [4] with a proper construction and equipment to make this process possible. The diesel on the second small container could be filtered out and refill the tank later. This requires a lot of inventiveness, expertise and safe design of the whole process, so I recommend my previous (easy & safe) suggestion.

I would use a hole saw with magnetic base. (you can rent them)

Set the Drill Depth Gage to be just under the material thickness of the Metal so that the drill will stop just before the inner metal surface. Drill Nice and slow and keep some Cutting liquid nearby to keep the hole nice and cool.

Also. the Magnetic base will help to hold the shavings onto the drum.

Drill the Pilot hole before-hand, Cleaning the drill castings often - that's the hole for the hole saw to centre.

Once you have completed the first pass hole saw drilling (ie, you have a concentric hole sawed into the metal, Plop a few neo-magnets (high strength magnets) on and around the cut area and begin to knock out the rest of the material within the cut face. (at this stage a small dremmel could also be helpful)

before you start your knocking, i would tie something into the pilot hole so that you can catch the metal ring that will fall into the tank.

How to drill steel with large bit outside the drill press

When drilling metal, should I start with a smaller bit before using a larger bit?

How do I drill holes in Aluminum / Aluminium sheet?