How would a school photographer compose shots for easy cropping?

I work at a school, and at the start of each year my department (combined IT and library) plays the role of school photographer of sorts, taking photos of several hundred new students that end up on their school ID (the official photographer comes in later in the year, so we need photos sooner, rather than later)

Our setup is somewhat basic: We have a HD webcam, some custom software and two screens. One screen contains the list of student names, the webcam preview and a big green "shoot" button, the other screen faces the student and shows them the same webcam preview, their name (to confirm it's them) and the final photo we take.

The webcam preview has a silhouette over the top. Students are supposed to sit on the chair and line themselves up with the silhouette so we get a consistent photo, but they're 12 year olds, so their height, posture, hair and such changes, meaning only a handful of kids fit into that silhouette.

After the fact, I go into JPEGCrops or Photoshop and manually crop the 300 or so photos. I use the rule of thirds and put the line for the top third on their brow, and try and line the center of the image up to their mouth. That gives a consistent photo with their eyes in the same spot and enough room for large hairstyles and broader students. You can see a sample image with a random photo I got from Google (in reality, the student would be sitting upright, facing the camera straight on) 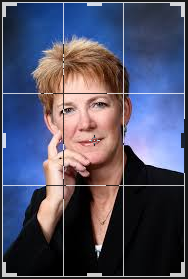 So my question is, how does a school photographer manage the differing shapes of students? Do they adjust their camera per-student? Do they just shoot wide and use a program to crop? Is it an automatic process or done by hand? Am I thinking this over too much, and should just spend the extra 10 seconds per shot to manually adjust the webcam?

I'm building auto-cropping into my custom software, so it'll use facial recognition to find the face and set the crop accordingly, but there could be software out there that does this for me, and I just haven't found it.

Unless there's some reason that the photos must be aligned and cropped perfectly (passport photos come to mind), I think you're overcomplicating things. Don't worry about rule of thirds or particular adjustments. Place the chair where you want it relative to the camera, and leave enough space that students don't have to move it to get in and out. Direct them to sit straight on in the chair and look at the camera (or your hand held above it). Move the camera vertically to get the student's head (including large hair styles) approximately centered.

I'd also get rid of the silhouette; it's probably causing more confusion than help. You can still keep a screen facing the student, if you want to show them their picture, but I'd only show the final picture since the live view could be distracting.

Remember, this is an ID card. The only purpose of the photo is to allow accurate identification; for that purpose, there's no need for it to be anything beyond a simple snapshot.

How can i uncrop a selfie where my head's cut off?

why are my daughter's wedding pictures cropped when trying to print?